Hirano Taichi @ fancy_karate This is a great photo. They are really great.

40,000 people are now in front of the residence of the prime-minister in Japan. Protests are mainly focused on the government’s plans for military reforms, which would turn Japan back to fascism, back to being  a war mongering country. War should be against those in the palaces, they say. This signals a shift in the security policy, since it’s based on an interpretation of the constitution by the government as the cabinet alone having the right to adopt any change in the security policy. See more here, in Japanese. People also protest against nukes, and capitalists’ exploitation of workers, “who are forced to overwork until they commit suicide”.  They plan to protest tomorrow too.

TOKYO DEMOCRACY CREW: Today, the walls of the anti-government movement collapsed. Anyone can participate in this. 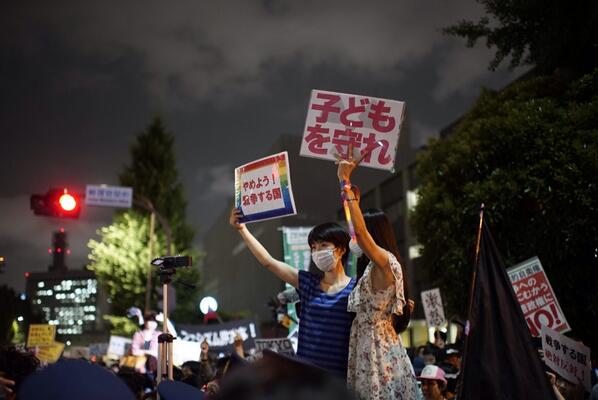 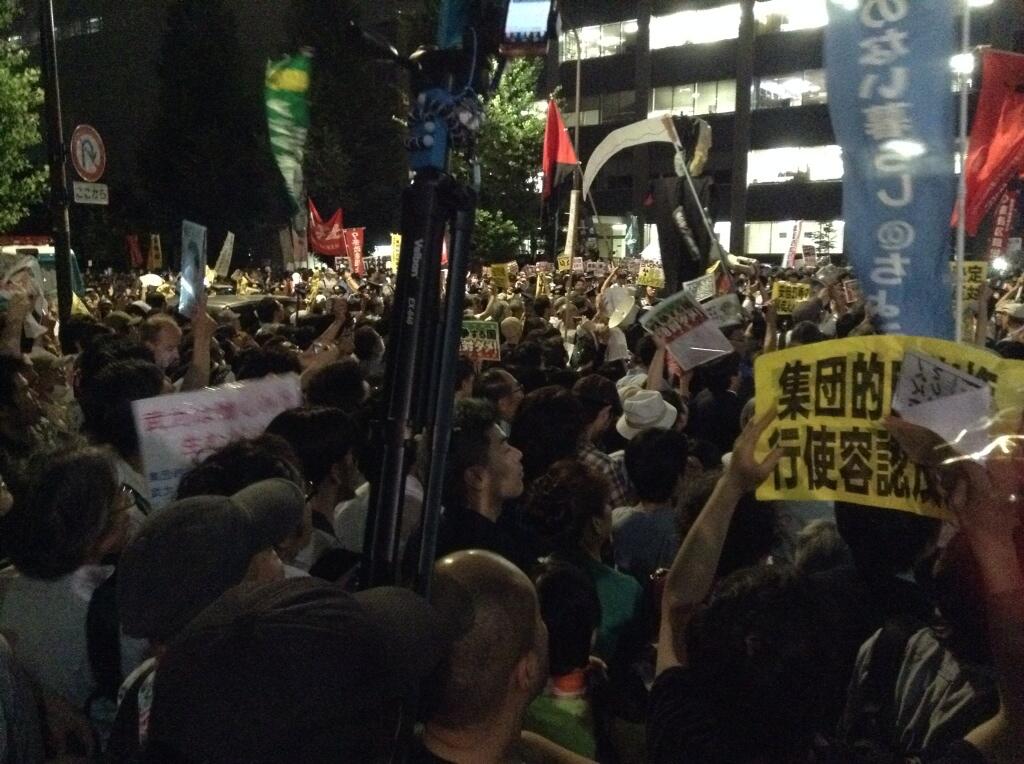 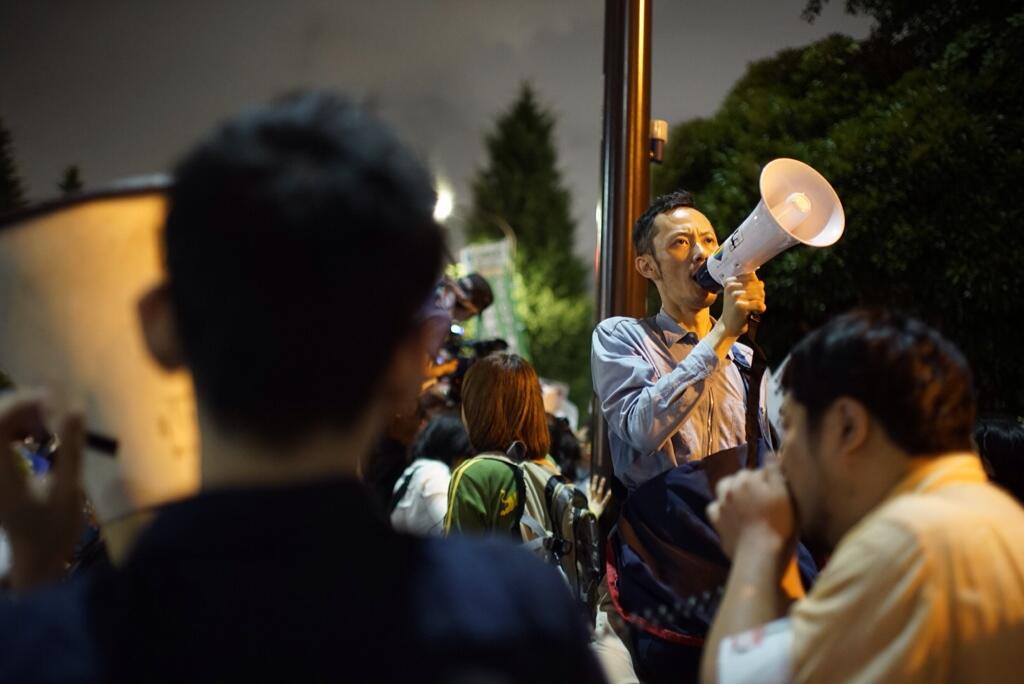 In a seperate yet related incident on Sunday a Man self immolates in Shinjuku in protest at PM Shinzo Abe government’s collective self-defense law changes
Around 1-2pm a man sat on the girders above a pedestrian footbridge near Shinjuku Station’s busy South Exit area with a megaphone and two bottles containing dark liquid. He wore a suit and sat on a small mat. He spoke into the megaphone for some time, announcing that he was going to kill himself in protest at the government’s push to involve Japan more in war.

Details are very fuzzy at this time. He seemed to use some kind of gasoline or alcohol, and judging by his appearance from photos looks like he was in his sixties. This means he would remember Japan’s previous logistical involvement in America’s war in Vietnam in previous decades, which prompted mass protests and also at least one similar act self-immolation. And it goes without saying that this protester’s public suicide recalls those of the Buddhist monks in Vietnam in the 1960′s. 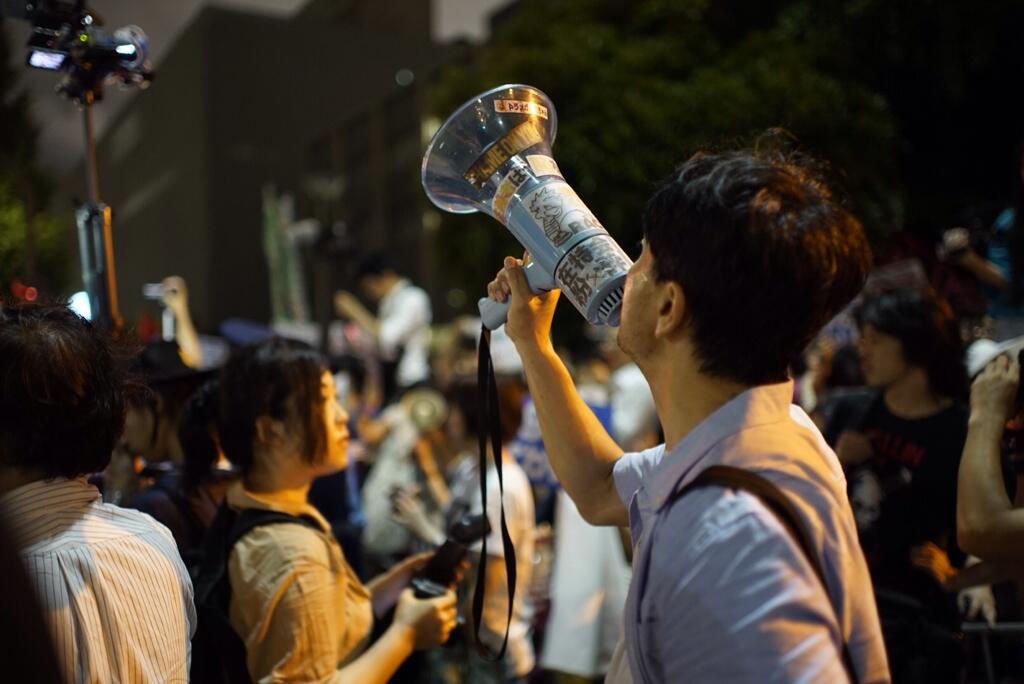 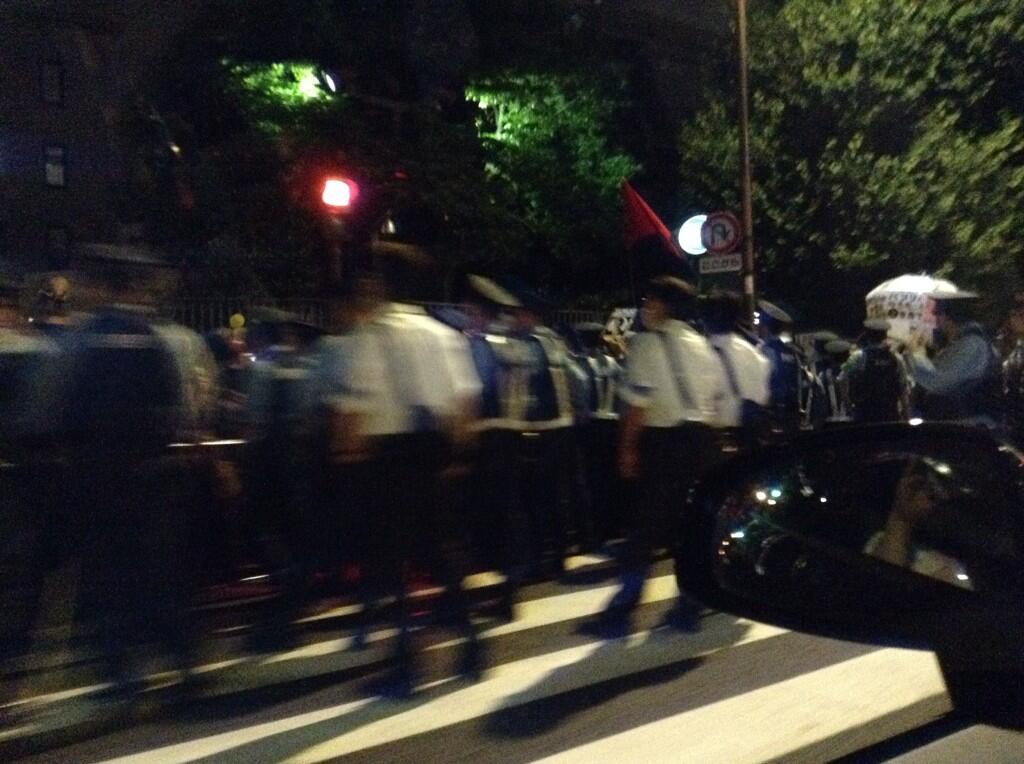 This pic is viral now in Japan: 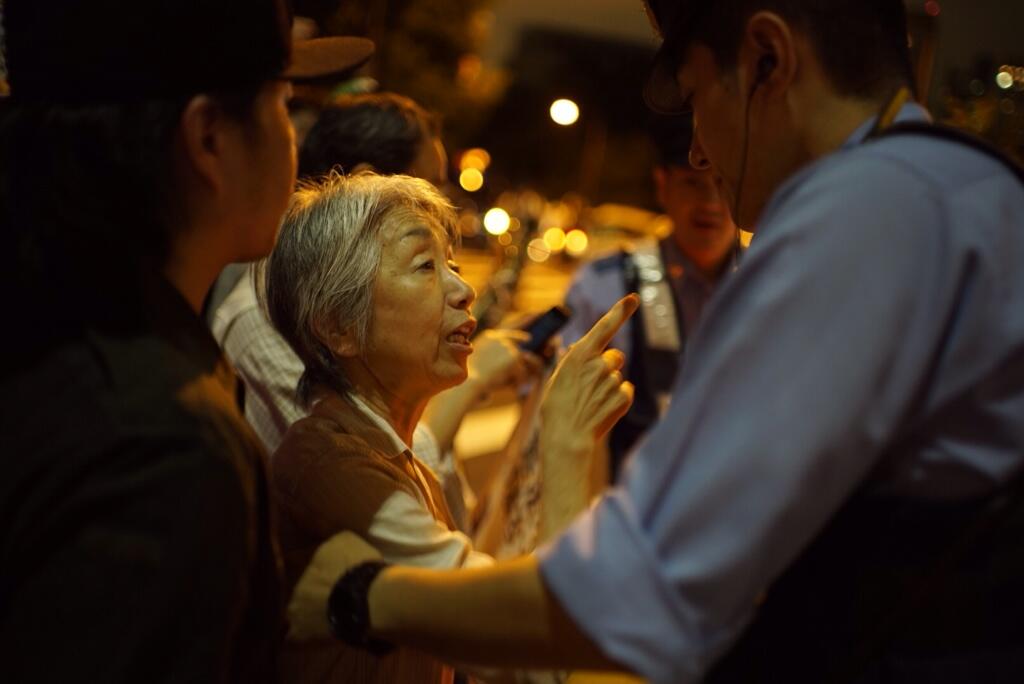 Japan PM’s been to dinner with the leader of Buthan. 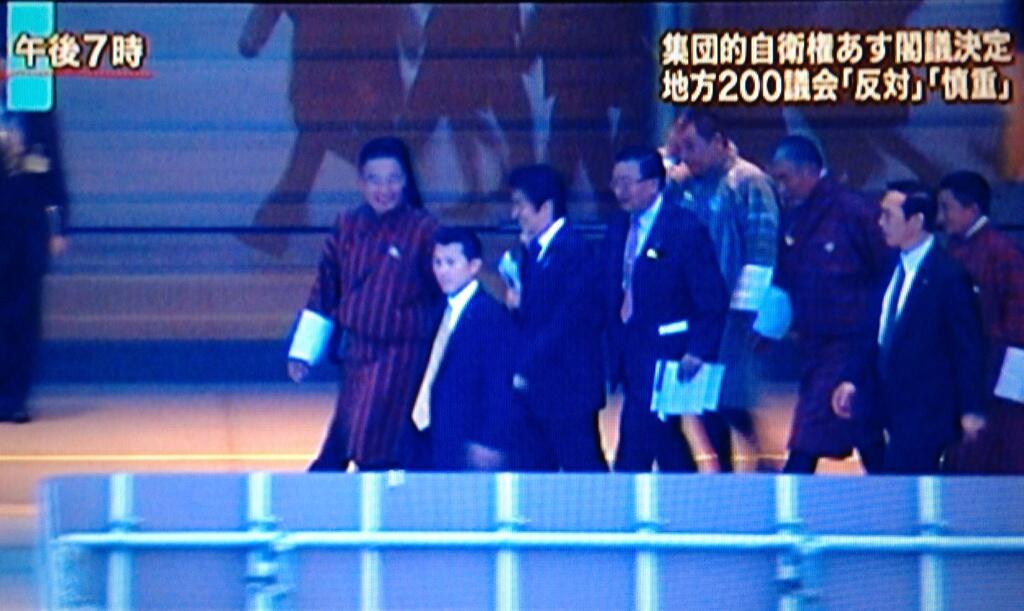 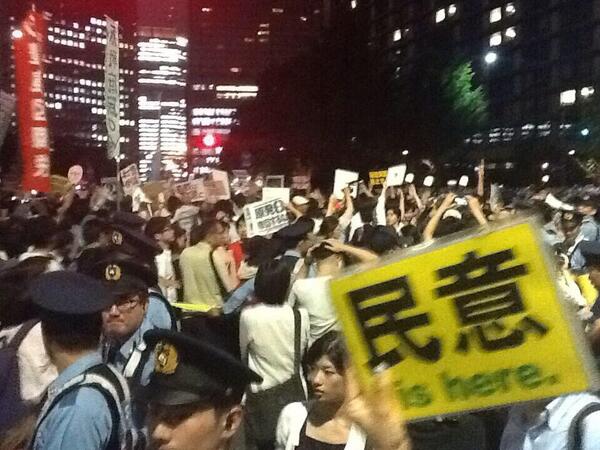 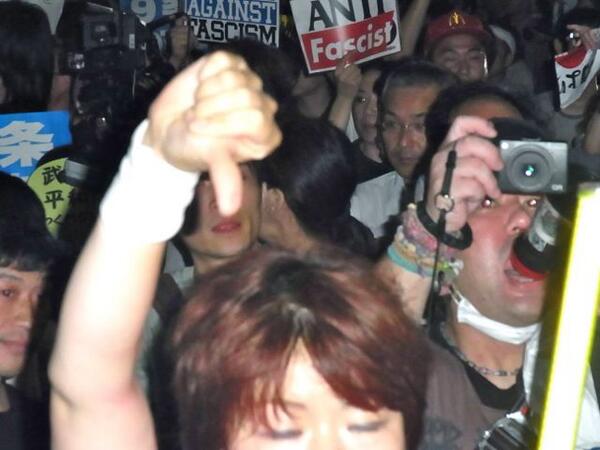 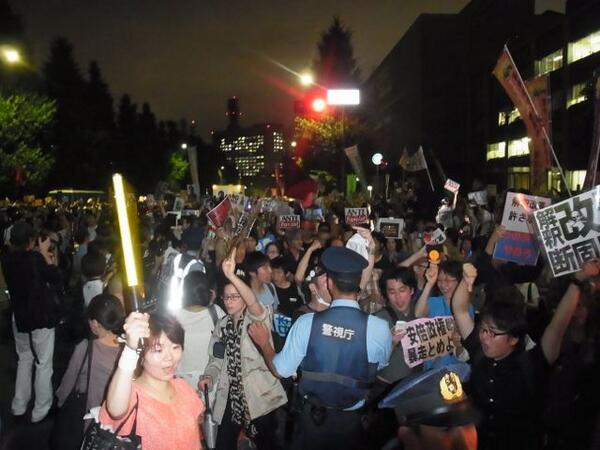 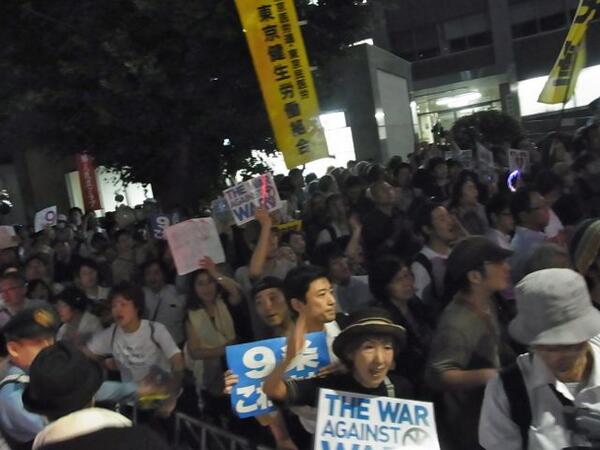 “The cabinet is expected to adopt a resolution revising a longstanding interpretation of the constitution drafted by the United States after Japan’s World War Two defeat. The junior coalition partner in Abe’s government has indicated it will back the change. Legal revisions needed to implement the change must still be approved by parliament, which could impose further restrictions in the process.”

“Conservatives say the charter’s war-renouncing Article 9 has excessively restricted Japan’s ability to defend itself and that a changing regional power balance, including a rising China, means Japan’s security policies must be more flexible. Critics say the change will gut Article 9 and make a mockery of formal amendment procedures. “The constitution should check government powers, but Abe is using his powers to change it,” protester Umehara said.” Source 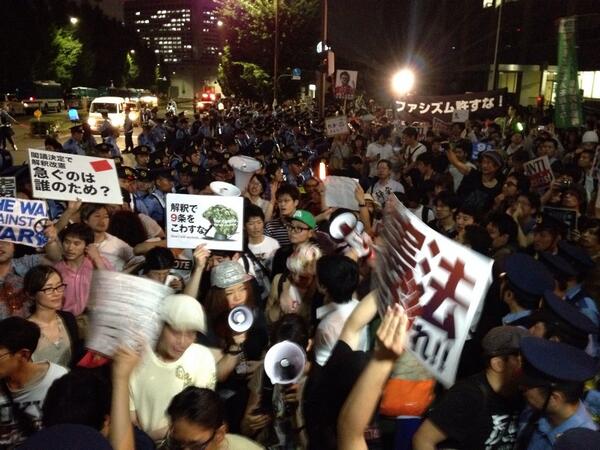 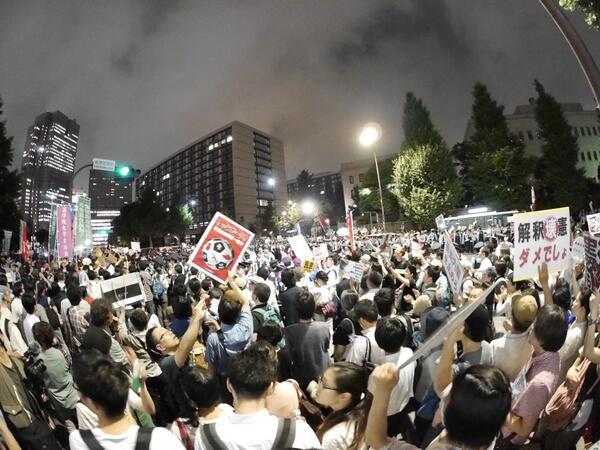 Tokyo, against fascism: It’s 10 pm in Tokyo and more and more people are gathering at the prime-minister’s residence mainly to demand that he does not break turn Japan into a country that wages war. People are calling on him to stop it and use the f word too; they are angry. pic Kazumasa Kawaguchi @ kazsoul  via  TOKYO DEMOCRACY CREW who also says: “People are not not paralyzed.” 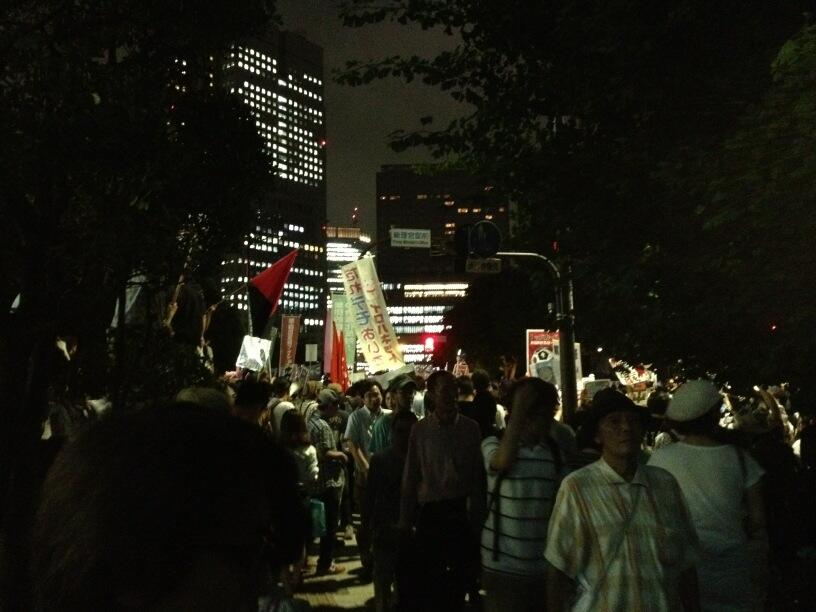 Ando Naoki (ando naoki) @ torapocodan No sign at all the protest is about to stop: “Fuck Abe”, “Don’t break the Constitution”  people chant in front of prime-minister’s residence. 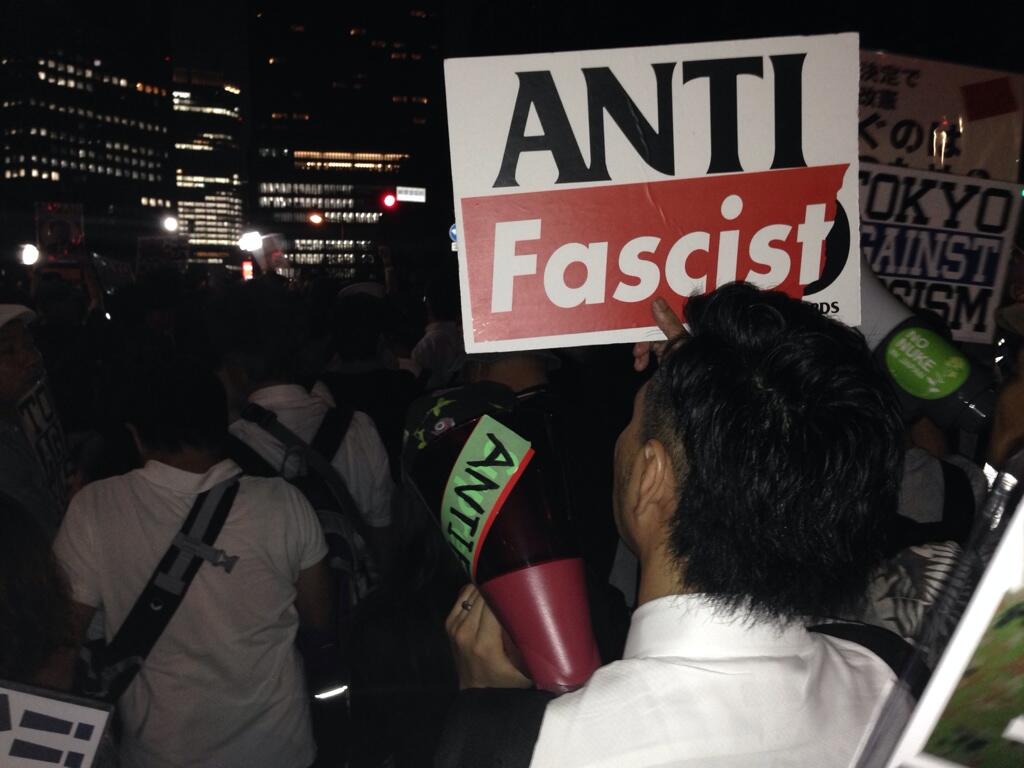 Tokyo, against fascism; local time 20:08 “People are everywhere, they are the voices opposition to constitutional interpretation! Hear the voices of the people!”; they demand changes to the constitution. via @kirayoshiko 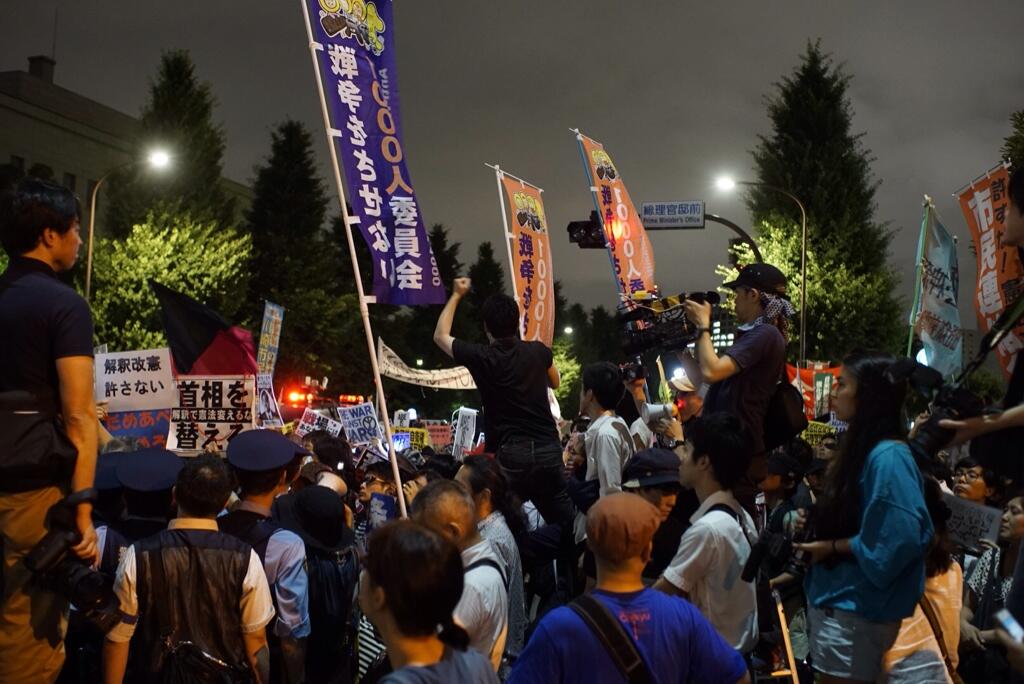 “Nazi bastards in the trash”, pic via nāgita # Antifa @ naagita 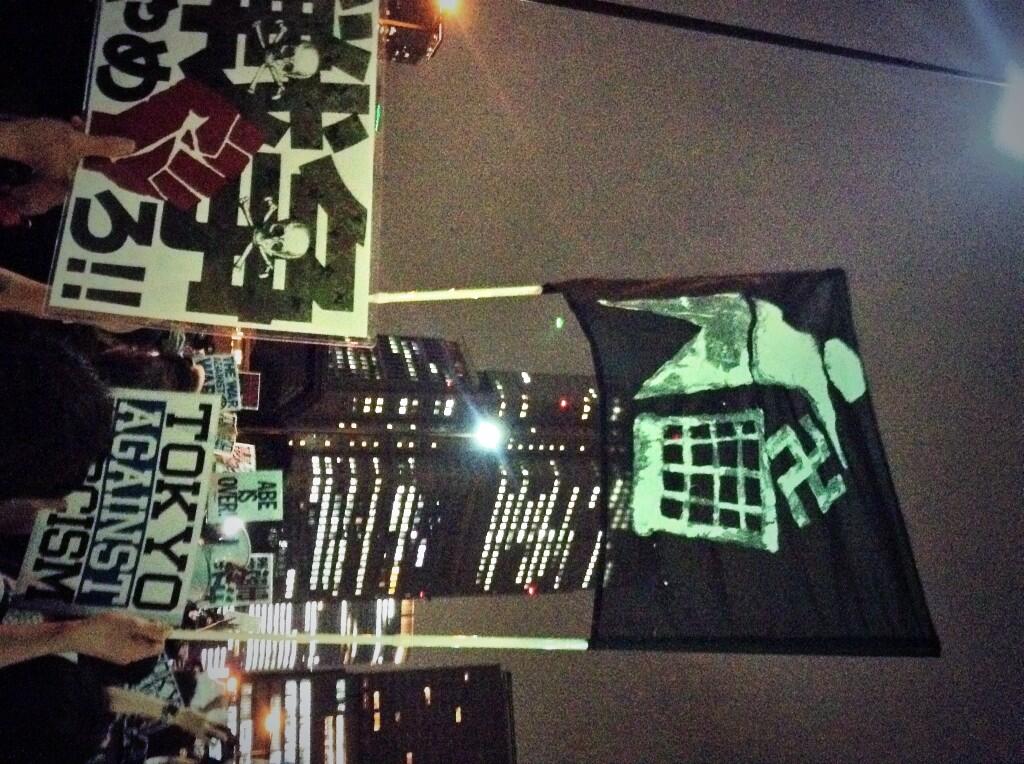 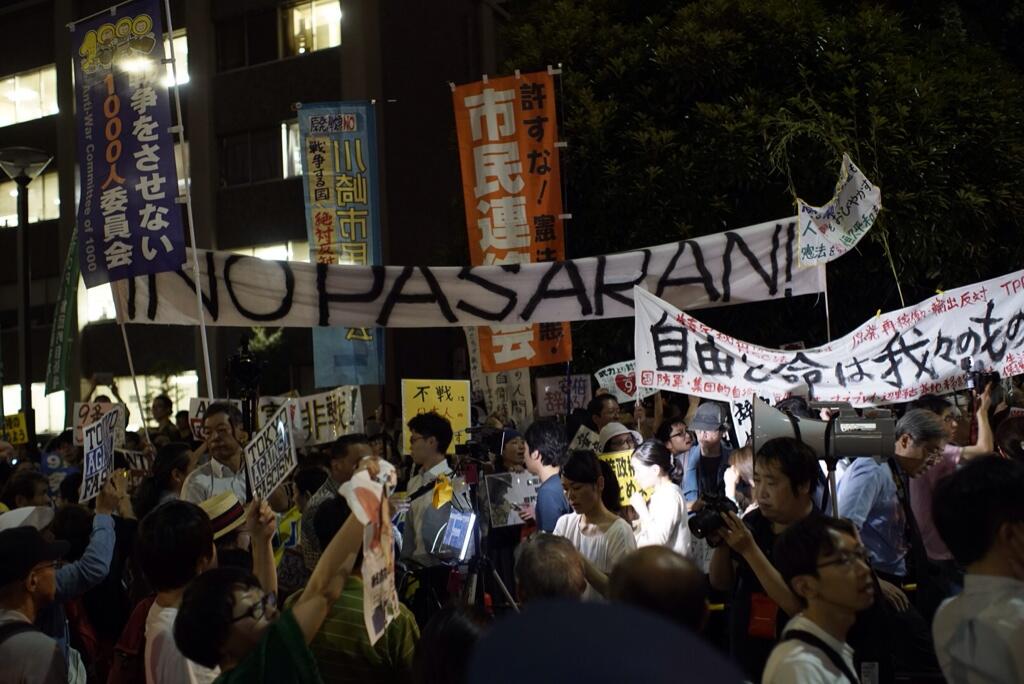 This protest is organised, they say, as collective self-defence against the ruling power, against the unlawful enterprise, high tuition fees; they demand the repayment of scholarship; and they also speak up against those who are forcing workers “to overwork until they commit suicide”. One of the speakers at this protest is Kira Yoshiko from the Communist Party.

DrawlingStone — Will of the people but it is clearer now. It is to protect the life, and that, protect the peace. Do not live in a “country war country!” Emergency protest. 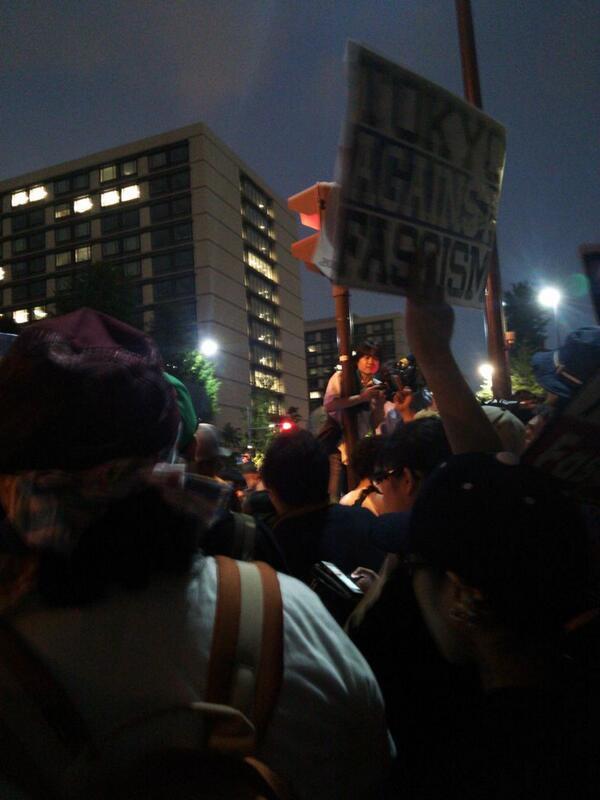 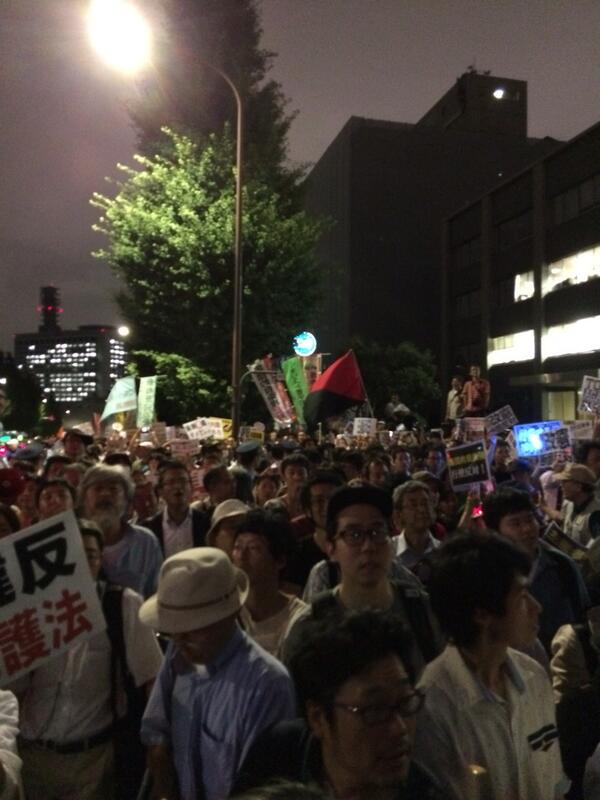 pic via No  nukes More hearts:  message addressed to Japan Prime Minsister: “You want war, but not war among those who filled the palace before.” 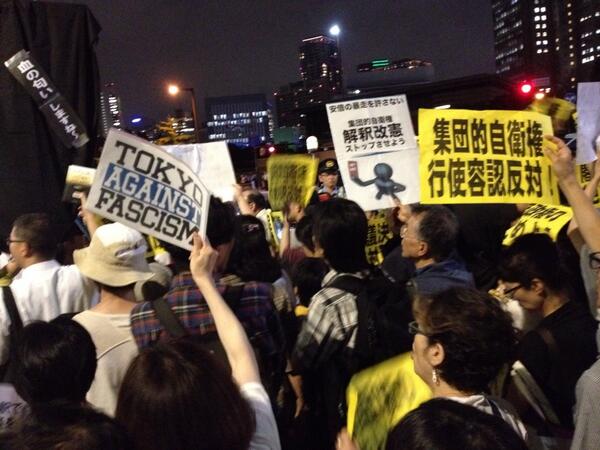 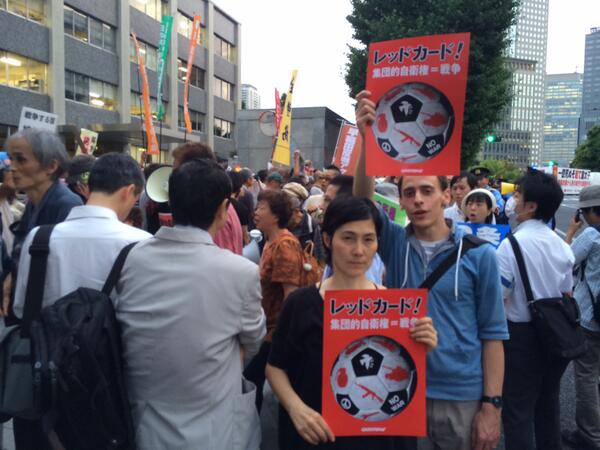 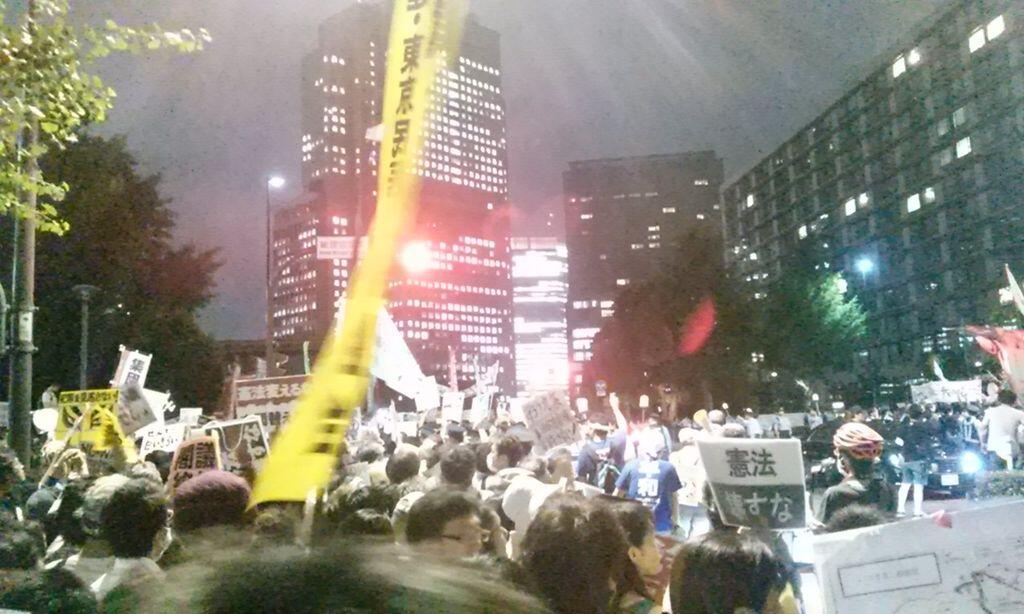 audrey_biralo — Kira Yoshiko, “It’s a coup when young people are forced to poverty”, such could be interpreted an amendment to the constitution. 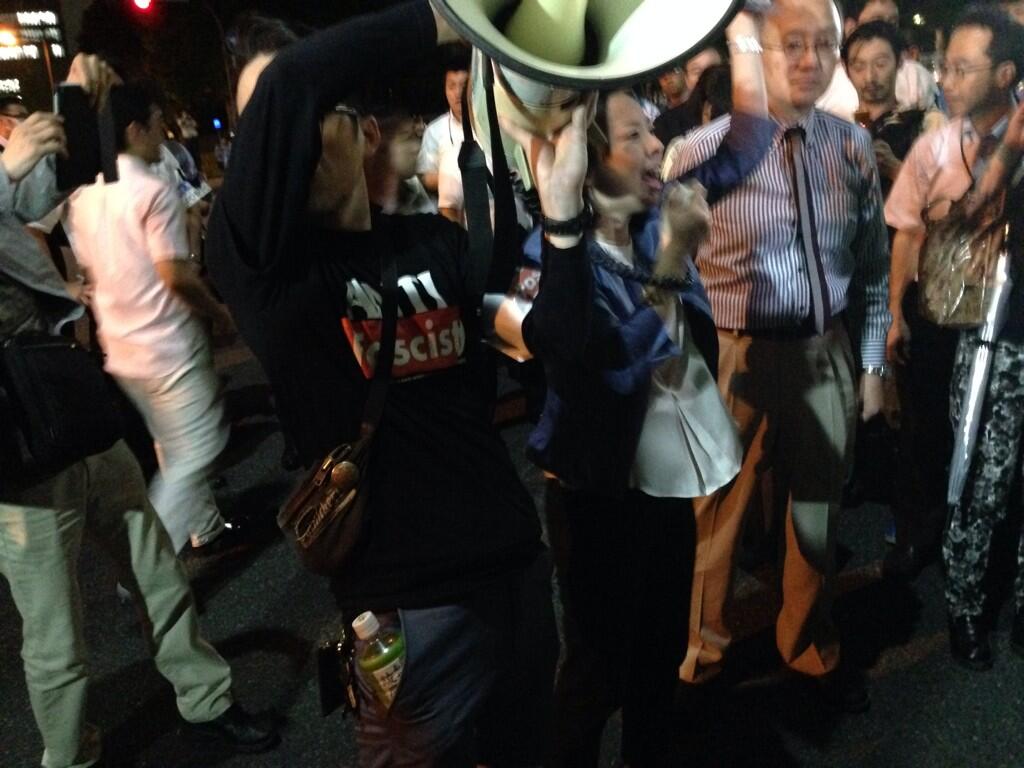 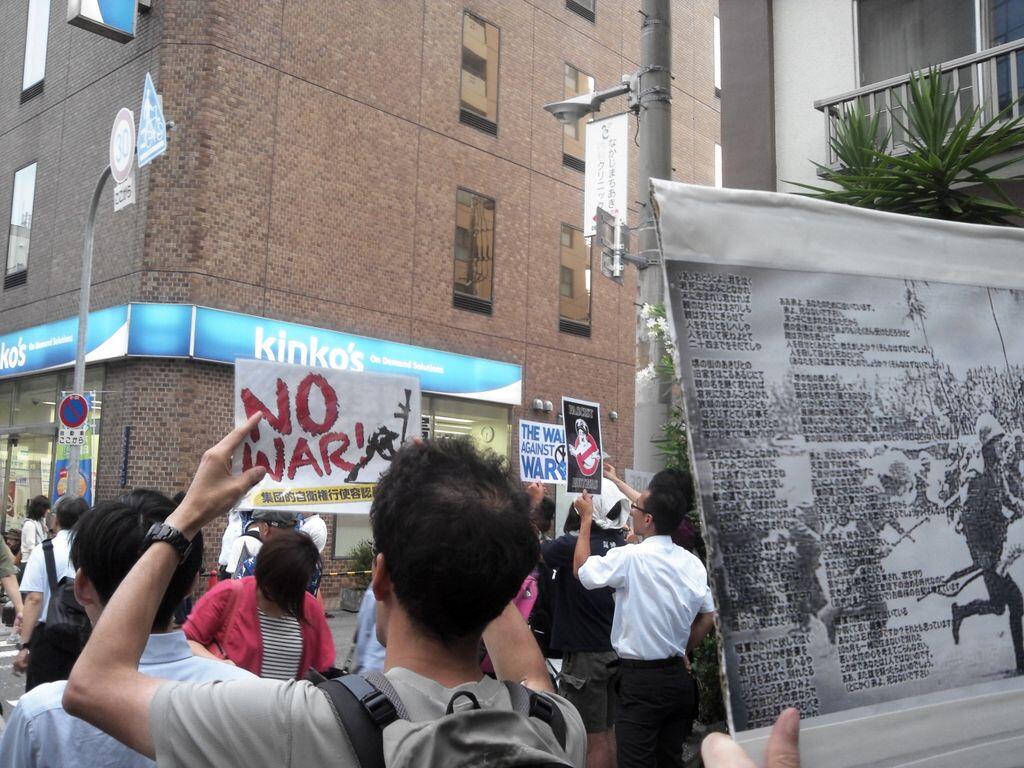 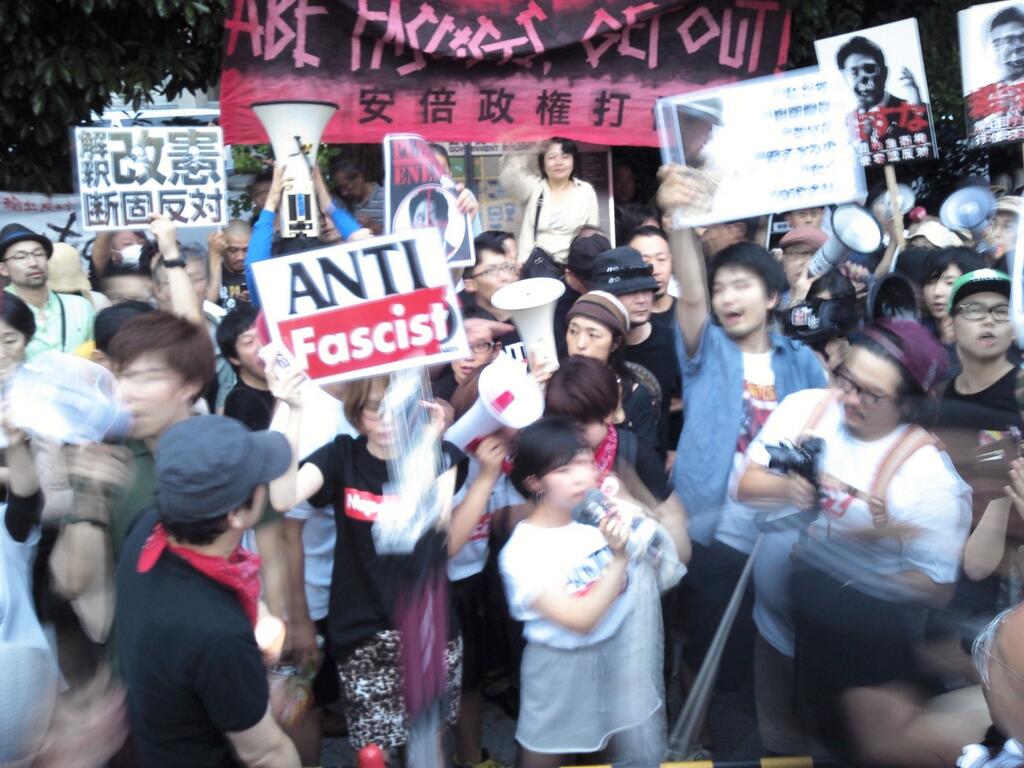 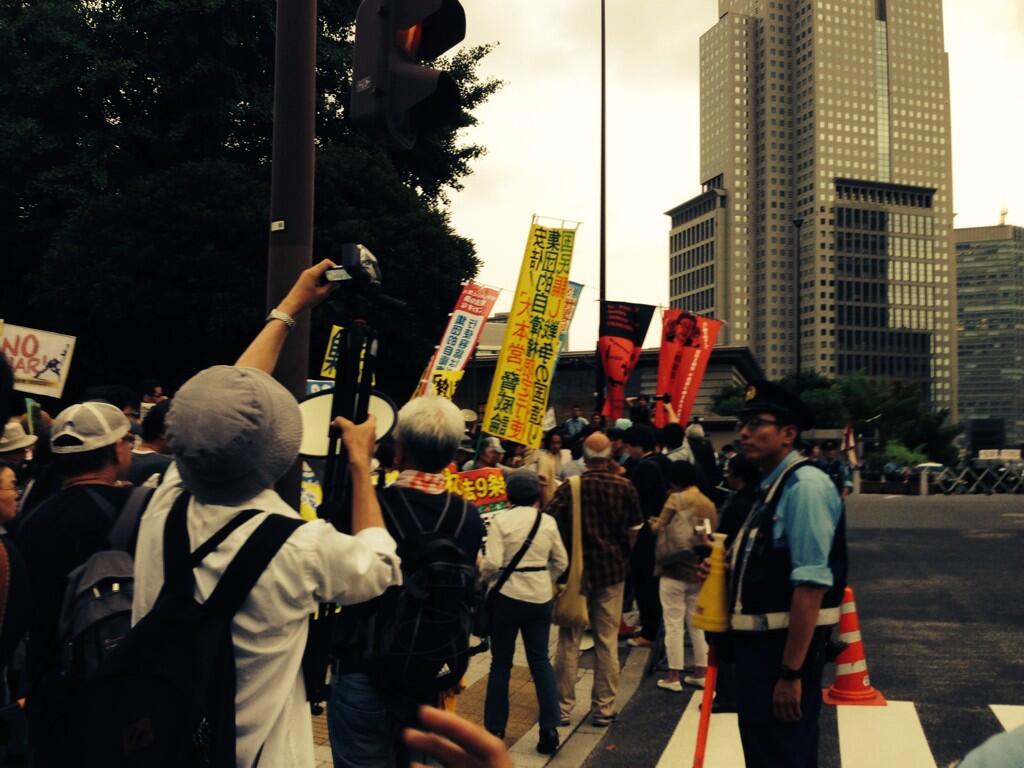