Syrian refugee children peeing on the police barricades in Taksim

The city of Istanbul has been turned into a battlefield by the AK Party government once again on the May Day protests. An unnamed curfew has been declared; Prime Minister Davutoğlu stated “there is no prohibition of the May Day, only precautions and security measures by the provincial governors.” Thus he made it clear that officially May Day has not been outlawed -yet! However, streets have been occupied by riot police, roads have been blocked, highways blocked, a planned day-long power cut issued for the central Istanbul, all public transport halted, no cars allowed on streets and all civilians seen around were subjected to arbitrary body-checks from head to toe. The whole city of Istanbul has been treated like an invaded, fallen hero’s motherland, in tied up but conceited.

Thousands of riot police have been flown to Istanbul from across the country and more than 25.000 riot police (equivalent of national guards) have been deployed to Taksim Square alone, dozens of water cannons, armored shooters, helicopters, and of course dozens of thousands of tear gas canisters have been deployed to and around Taksim. As all the roads leading to Taksim had been occupied by the police so that the workers might not reach Taksim Square and block traffic, even the birds were not flying.

The few civilians who dared to go out of their houses were subjected to several body-check processes in randomly spread check points in every corner of the city. Those who were determined to go to Taksim Square -where 34 citizens had been shot-dead by stated-related agents in 1977- had to walk through many of those check points and get arrested in one of them for ‘participating in an illegal gathering’. Police without uniforms or ID numbers; reminding people of the Besic of Iran

The city of Istanbul which has much to offer to thousands of tourists every day with its thousands of years old history, also allowed many non-Turks to experience a unique day as the tourists were forced to walk for miles with suitcases rolling around.

The day ended with a total number of detentions around 350, and detentions started early in the morning. Already in the morning, a group from the Communist Party started running from a nearby cafe in Taksim, towards the Republic Monument. They had hid in the cafe whole night, had their breakfast, and just when 20.000 riot police thought they cleared all the square and started spreading the circle, they ran to the monument and waved their flags for a few minutes until they got assaulted and detained. During the detentions, police used excessive force and backwards handcuffs, to which a street dog reacted, reminding people of Loukanikos, the late riot dog of Athens.

Most other groups had designated surrounding neighborhoods to gather and march in bigger groups. Where they would gather in the first place, the police set up massive barricades to force them back. The leaders of the syndicates and unions negotiated with the police, explaining that this is their constitutional right and there are clear court mandates stating that it is illegal to prevent them from celebrating the May Day, police insisted that it would cause risk to national security, public peace and congest traffic if workers were allowed to march to Taksim Square. As the unions declared that they will no longer insist and start to disperse, the police started shooting rubber bullets and gas canisters from all sides without a warning, and pro-government civilians started attacking with clubs and knives to workers. One person got stabbed in his stomach and several others were beaten by pro-government civilians. Later, the perpetrators were left free and the beaten-up victims were detained.

In the meantime, pro-government syndicates were holding an alternative May Day demonstration in the city of Konya, celebrating the good deeds of the government and chanting antisemite and anti-Armenian slogans, calling for unity of Turkish workers against the international plot to overthrow Turkish government. After the alternative May Day demonstration, President Erdoğan gave a speech in Ankara and stated “May Day is my day as well and I do not approve of Taksim as an appropriate location for this. If one wants to have a demonstration or a protest, it has to be at the designated locations that the government decides; if they have enough power they should gather in those designated locations.”

Compared to previous years, this year’s power cut seems to have had a major censorship effect as the number of live-photos and tweets have decreased from the ground zero compared to other years, with the lack of regular connection. In the previous years, when the mobile networks failed to distribute service to the people on the streets, people would remove the password from their household modems and allow free wifi connection to protestors, thus contribute to the free flow of information. As there was no electricity in the districts circulating Taksim, no modem connection was established, and most content was released as in edited form hours after the actual events. 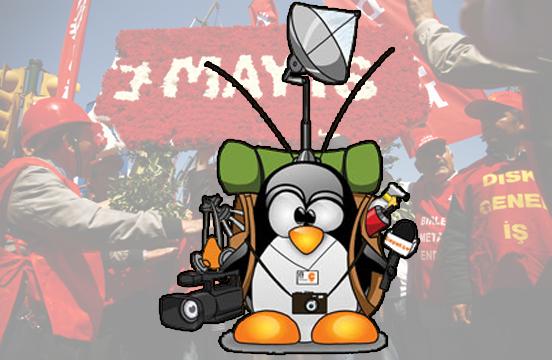 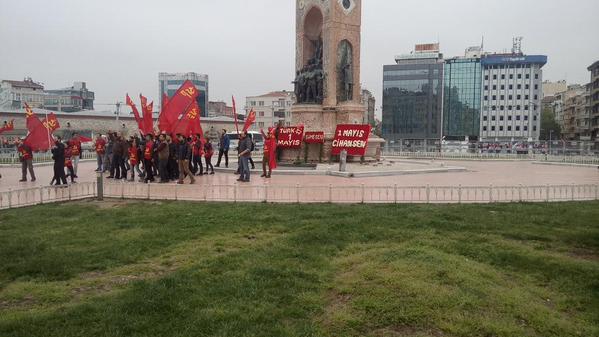 Communist Party members running behind the barricades to Republic Monument 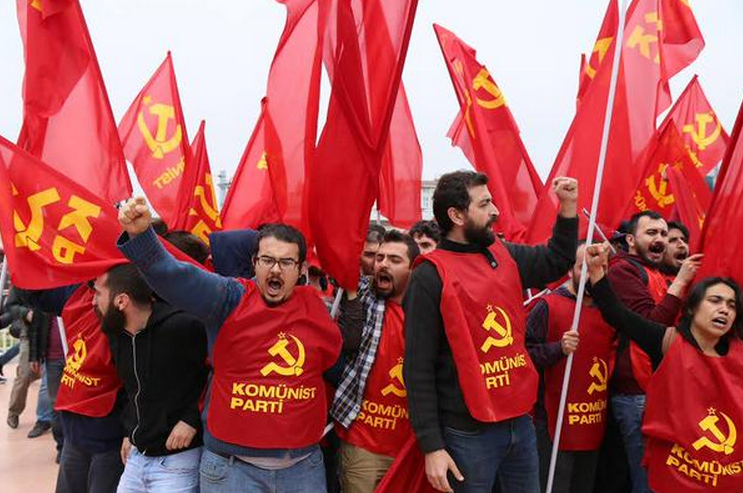 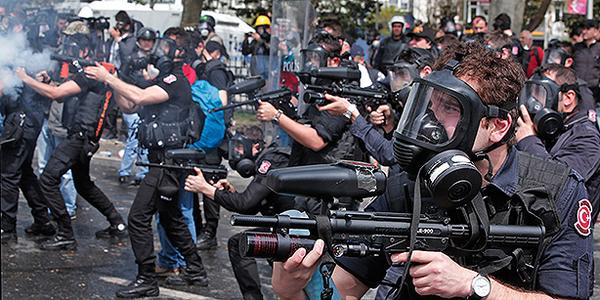 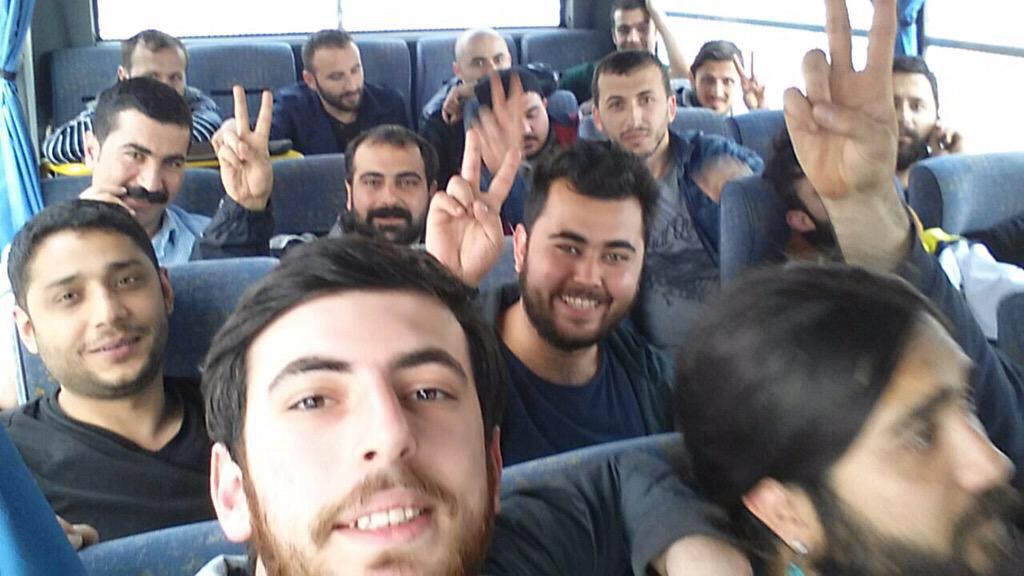 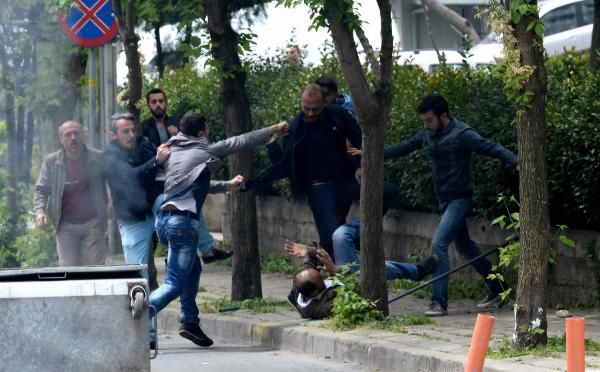 Later, the person beaten up got arrested and not the perpetrators