Military police are to steal the land of 8,000 poor for real estate profits.

20,000 people in Belo Horizonte, Brazil, are to be attacked by 10,000 military police and evicted from their homes in a land grab mega-operation intent on creating a 6.5 billion dollar profit. 8,000 families will have their houses be demolished, and be thrown into total poverty and homelessness. The military police’s operation is illegal, there is not even a court decision yet for the mass eviction, and the state has not and does not intend to provide alternate housing. Police are simply interested in clearing the land from the 20,000 inhabitants so that real estate can turn it into profit.

Residents said: “We want peace and housing, we want a dignified and decent life. We strongly hope that the war operation against the poor is suspended. Homelessness means no rights, and a return to slavery.”

Two days ago, residents chained themselves to the Palace of Liberty in Belo Horizonte, in protest aiming to stop the state from rendering them homeless. Residents hope that the Public Ministry of Minas Gerais, and representatives of the Secretariat of Human Rights of the Presidency of the Republic will be able to stop the eviction. The sentence given by the judge who initially ordered the eviction is being contested as abuse by lawyers and prosecutors, but another judge who is trying the case did not even allow prosecutors in the courtroom during the trial’s session days ago. Prosecutors are trying to cancel the eviction, and get the judge who issued the sentence fired, but hopes for them to win this case are slim. For now, they’ve managed to halt the police operation for some hours.

However, from helicopters, police already dropped thousands of leaflets announcing residents that, unless they evict themselves, the violence the military police will inflict on them will be their fault – classic fascist victim blaming.

The leaflet says: “The PMMG (Military police of Minas Gerais) will follow justice officers in fulfilment of the Judicial Order of Repossession in the occupied lands in the place known as Mata do Isidoro – Zilah Sposito It is suggested that pregnant women, seniors, children and people with special needs leave the place before the repossession to preserve the physical and psychological integrity of this people.

The responsibility of this people’s health is of the (resistance) movement.

The people will be able to leave beforehand of the place and take away their belongs following the orientation of the military police or spontaneously.

The PMMG will be at the place, fulfilling their constitutional mission to guarantee the power of the administrative police of the justice officers that will be in possession of the necessary documents to the repossession.

The PMMG will act according to the fundamental principles of the human rights, specially in the preservation the physical and mental integrity of everybody.

The main goal of the presence of the PMMG is to ensure the fulfillment of the judicial order with total priority in the respect of the dignity of the human person.”

Information in Portuguese for those interested in how they can help the residents fight the land grab:

Coletivo Mariachi: “It is simply barbarism to forcefully evict 20,000 people from their homes, including pregnant women, children, teenagers, people with disabilities and elders. This barbarism and the massacre make perfect sense and have been such calculated that if either side loses emotional control – the troops, or the residents – a deadly UNPRECEDENTED reaction can happen. The military police will raid with heavy weaponry and lethal arms and the war machine will be unleashed in the middle of a crowd of desperate people, emotionally shaken by the loss of their households. The RISK OF LOSING MANY LIVES IS IMMINENT. This will be a huge police operation: 10,000 police or more will be deployed.”

#IsidoroResiste video of protests that have taken place so far.

The communities affected by the eviction will be Victory, Rosa Leon and Hope. Frei Gilvander Moreira, a supporter of the residents, warned authorities that evicting these people may turn into “a tragedy of unimaginable proportions”. According to him, “the people will not admit that their homes (will) be demolished,” because they built them with loans and with minimum wages. Among the 20,000 people, the fear of a violent police attack is huge.

Source of this photo

Without the right to legal defense, the residents held meetings to decide what to do and chose unanimously to remain in their homes. On alert tone, human rights defenders insist that “this may be one of the largest massacres in Brazil.”

Police officers already went to residents to coerce them to flee their homes. They handed them leaflets which warned them that they will be held accountable if the police will kill or hurt pregnant women, elderly, children and people with disabilities.

“The psychological torture against the families is constant. Days ago, 15 police cars accompanied officials Energy Company of Minas Gerais (Cemig) who tried to cut the electricity of the community. Faced with resistance, police threatened and humiliated a resident who tried to explain to a military police what their basic rights are:  “You’re a bitch, a bitch. I noted down where you live. Your house will be the first that we’ll knock down and I’ll still slap you in the face,” screamed the police officer.

Charlene Egidio, one of the coordinators of the resistance movement says that the constant presence of state repression transforms the lives of people into a living nightmare. “Police helicopters fly by day and night, they do not let us sleep; at night, police raid our homes to intimidate us; cavalry and vehicles storm our communities daily threatening us”.

State terrorism against the 20,000 poor is driven by the real estate business which wants to turn the land into 6.5 billion dollars.

In the assembly of communities held during this week, the decision is to resist the eviction. “We will not leave the ground. It was empty and now it’s serving to housing. The three communities are united in this idea, “said Carvalho Elielma, occupation Victoria resident and member of the coordination of the community.

For Sabrina Kelly, a resident of occupation Rose Lion, the eviction will be a great cowardice. “It’s a lot of injustice this dump. We spent everything we had in building our home. People who had taken up loans. But the hardest thing is the situation of children. Imagine 8, 10 years old children begging you not to leave your home. It’s hard to describe, it’s heartbreaking, ” Kelly reported. 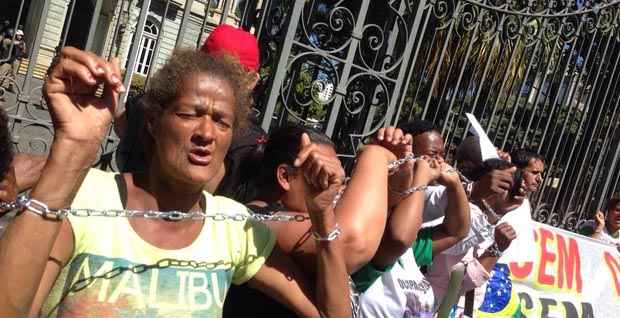 200 residents chained themselves on the Palace of Liberty in Belo Horizonte to stop the state stealing their land.

Source of the photo

Jennifer Baker is the founder and editor of Revolution News revnewsmedia@gmail.com