45 minuntes video, camera in the same place; estimated 50,000 people at the anti-austerity public assembly in London and BBC and other televisions in UK censored it.

BBC managed to get themselves to tweet one message which seemed as an excuse, but then deleted it: 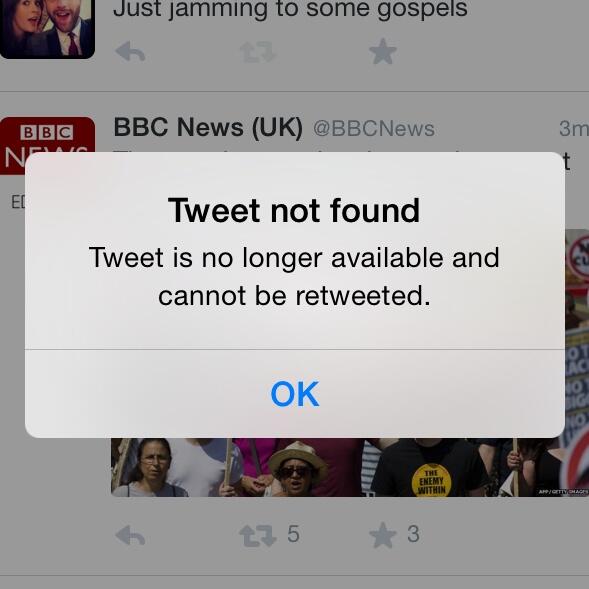 via Public Assembly and Anti-Fascist Action for Greece: “What a pathetic response from the taxpayer’s BBC Facebook page. So ‘why did @BBCNews tweet about @pplsassembly march then delete it?http://t.co/foXibsHPDM.’ Perhaps because they are also cutting journalists and other tax funded workers? Please make a complaint about State censorship and staff cuts at http://www.bbc.co.uk/complaints/, comment on their Facebook page & retweet about them deleting the tweet… http://twitter.com/the_dbh/status/480651260434350080”

Only a complete moron with zero contact with reality would say the BBC is left wing. His name is #IDS. #NoMoreAusterity — Peter Smith (@Redpeter99) June 21, 2014

To everyone who is sick of this Tory led censorship of our “free press”, lets get the #NoMoreAusterity trending. — michael allison (@mjallison77) June 21, 2014

@BBCNews and @SkyNews shame in you for not reporting about the #NoMoreAusterity march in London — Jim Hutchinson (@CyprusJim69) June 21, 2014

how on EARTH can central #London be brought to a standstill by 50k people & IT’S NOT REPORTED @BBCNews?? Just HOW? #NoMoreAusterity — Kathryn Anderson (@kaffando) June 21, 2014

#NoMoreAusterity: What one person receives without working for, another person must work for without receiving. #PeoplesAssembly — Sam Sussex (@SamSussex) June 21, 2014

Whatever, I still say solidarity to the mob out for #NoMoreAusterity just be more like a ‘mob’… Make #havoc — c’est destin (@cestdestin) June 21, 2014

I am so filled with anger & hatred (& I don’t hate anyone…usually) of @BBCNews & #ToryOwnedMedia not reporting #NoMoreAusterity — Kathryn Anderson (@kaffando) June 21, 2014

So inspired and heartened by images from #NoMoreAusterity today. I love each and every one who is marching on all our behalf. Thank you. — Scriptonite (@Scriptonite) June 21, 2014

@ChrisClandestin 6.7 million, in work are below the poverty line. How dare they expect to be paid fairly. You fucktard #NoMoreAusterity — Steven Howlett (@bertironmonger) June 21, 2014

So the media are basically saying peaceful protests achieve nothing, but 500 guys going to Iraq is worth the coverage #NoMoreAusterity — Doctor Poo (@lukeosullivan) June 21, 2014

Why no reporting on #NoMoreAusterity demo #Skynews #bbcnews ? media Blackout @pplsassembly: View from the stage pic.twitter.com/tzYRCuedM5

How to contact the Guardian and Observer http://t.co/b0Bkzozpt0 via @guardian Why is The Guardian not reporting 50000 at #nomoreausterity?

“@BernaMeaden: Austerity is a cruel scam. It takes money from the poorest while the rich get ever richer. #NoMoreAusterity“

#NoMoreAusterity march has 50.000 ppl in the streets of London. @OwenJones84 says we will not accept the blame for a crisis we didn’t create — Milena Buyum (@MilenaBuyum) June 21, 2014

If you’re wondering why we at the BBC aren’t covering the #NoMoreAusterity march, then stop wondering: it’s because Nigel Farage isn’t on it — Nick Robinson (@KipperNick) June 21, 2014

And please don’t think that David Cameron has instructed us not to cover #NoMoreAusterity: we’re quite capable of anticipating his wishes. — Nick Robinson (@KipperNick) June 21, 2014

Your browser does not support iframes.

how on EARTH can central #London be brought to a standstill by 50k people & IT’S NOT REPORTED @BBCNews?? Just HOW? #NoMoreAusterity — Kathryn Anderson (@kaffando) June 21, 2014

What a surprise, a complete media blackout of #NoMoreAusterity demo at least 50000 people! Where are @BBCNews @itvnews @Channel4News @itn ? — Amanda (@coolchiccy) June 21, 2014

Yes @BBCNews our team are crap at football, can we hear about the massive protest now please? #NoMoreAusterity — Nancy Farrell (@nancyrowina) June 21, 2014

Only 1 in 8 housing benefit claimants is unemployed. Most work but underpaid http://t.co/d1YUZCxTBj#NoMoreAusterity — NUMBER ONE (1) (@CAROLE_A_JONES) June 21, 2014

Only a complete moron with zero contact with reality would say the BBC is left wing. His name is #IDS. #NoMoreAusterity — Peter Smith (@Redpeter99) June 21, 2014

Dear @bbcnews if you look out of your window a news story is marching past #NoMoreAusterity@pplsAssembly — SLACK_TV (@SLACK_TV) June 21, 2014

The Tories were excited about today’s big demo until they discovered it was #NoMoreAusterity not no, more austerity. — Peter Smith (@Redpeter99) June 21, 2014@PeoplesNotts brilliant – thank you

Your browser does not support iframes.

Owen Jones: we will not accept blame for the crisis being deflected onto ordinary people — People’s Assembly (@pplsassembly) June 21, 2014

Thousands of cheery protestors getting a tan as they march through central London with the @pplsassemblypic.twitter.com/fTEtETYLsJ — Owen Jones (@OwenJones84) June 21, 2014

The People’s Assembly: “Top cop quote: to passers-by, ‘get on the pavement, The People are coming!'” #nomoreabandonedchildren

pics above at Parliament Square, via Steven Dawe

“The Poverty and Social Exclusion project found that more than 500,000 children are living in families who can’t afford to feed them properly and 5.5 million adults have to go without essential clothing.” Source

pic via People’s Assembly‏@pplsassembly “NHS best health service in the world- Tories are selling it off to cronies.”

#NoMoreAusterity : Thousands – at least 4,000, some say 10,000 some 50,000, are participating now in London at a public assembly to have austerity done with and cuts stopped, as well as privatization of public services and utilities stopped.

The People’s Assembly, check out their site here: “The People’s Assembly, Trade Unions and campaign groups are organising a national demonstration and free festival to demand the alternative.  Living standards continue to drop, forcing millions into poverty, yet the politicians remain addicted to austerity.  This demonstration will assemble right on the BBC’s doorstep and march to Parliament to demand that the alternative to austerity is no longer ignored. Join us.”

via Movement to Strengthen Progressive Values: #NoMoreAusterity rally in London

So many people here from all over the country @pplsassembly march in London pic.twitter.com/ELV4lCQ4v3 — Chris Ginger Morgan (@sgtgingerchris) June 21, 2014

This week Wikileaks exposed a huge conspiracy by governments, for which they are not been held accountable yet:  “The whistleblower and transparency website WikiLeaks published on Thursday the secret draft text of the Trade in Services Agreement (TISA) Financial Services Annex, a controversial global trade agreement promoted by the United States and European Union that covers 50 countries and is opposed by global trade unions and anti-globalization activists.” Read it all, here.