Trending
You are at:Home»Europe»Cumhuriyet Daily’s Administration Relieved of Duty after Charlie Hebdo Publication
By Challe on 01/31/2015 Europe, Turkey
103
SHARES
FacebookTwitter

In the aftermath of the Paris Massacre earlier in January, Cumhuriyet Daily had taken a courageous step and printed Charlie Hebdo in Turkish. It was one of the two newspapers that were allowed to print content, and they attracted the outrage by islamist groups in Turkey. With the news of Cumhuriyet printing Charlie Hebdo in Turkish getting revealed, leaders from the islamist-rooted governing AK Party declared that their followers only should carry out their democratic rights and organize peaceful protests, never turn violent, and simply use judicial means to contest blasphemy.

The chief executive editor of Cumhuriyet Daily has been relieved of duty as of the first of February, after police raided the print house, thousands protested in front of the newspaper headquarters, thousands of death threats have been directed at staff and journalists of the paper. The relief message has been published on Cumhuriyet’s online version explaining that the chief editor Utku Çakırözer will no longer continue his job which he had started earlier in September 2014. The relief message also included a paragraph explaining that general administrative coordinator and editor in chief had proposed their resignation letters, and they were accepted by the board. The explanation also mentioned the apprehension regarding the low reach to general audience and the will to expand scope of readers.

Even though the duty relief and resignations do not mention a word of Charlie Hebdo publication in Turkish, the readers of the paper might draw the parallel between the Mohammed caricatures and the changes in administrative structure of the daily. The removed chief executive editor wrote a series of twitter messages giving the news of his removal to his followers stating that during the time of his duty the primary concern has always been the individual rights and liberties and the defense of them at strongest level possible, contesting censorship and corruption, always considering the public benefit in struggles, a courageous publication policy.

After thousands of death threats targeting the journalists and staff of Cumhuriyet, and several attempts to attack, some NGOs had organized a support rally and distributed Cumhuriyet on streets in Istanbul. 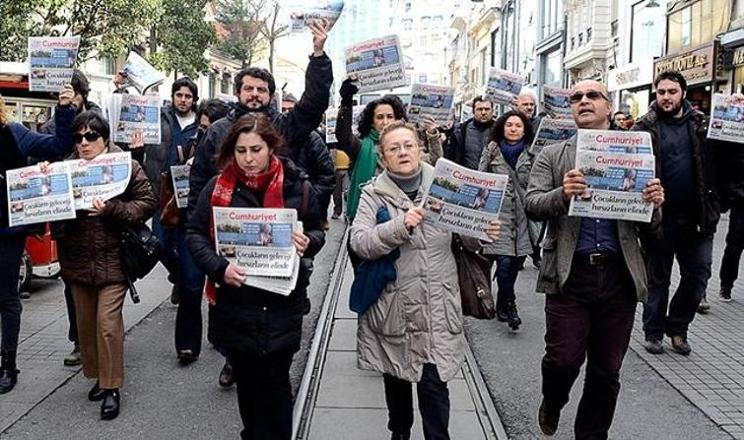