In Turkey, media response to Charlie Hebdo attack in Paris has had two sides as in many other places. The polarization has been stretching between those that celebrated the attack and those that stood in solidarity with Charlie Hebdo’s press freedom and supported it. In order to stand in solidarity with the French satirical paper, Turkish caricature magazines Leman, Penguen and Uykusuz have agreed to come out with the same cover page for this week’s issue. As many cartoonists all around the world, Turkish cartoonists also mourned over the violent massacre. Yet Charlie Hebdo once again came up with the unexpected and drew a cover page that showed Mohammed crying and holding a banner that reads “Je Suis Charlie”.

The French newspaper Liberation had offered refuge for the cartoonists of Charlie Hebdo, and the new issue’s announcement came in their offices too. On the other hand in Turkey, prominent newspaper Cumhuriyet Daily has been announced to be one of the two newspapers that are allowed to reprint parts of Charlie Hebdo’s latest issue. According to Liberation’s news piece, Cumhuriyet Daily from Turkey and the Italian Il Fatto Quotidiano will be printing parts of the latest issue of Charlie Hebdo. Later on the French magazine will be available digitally in four languages, in French, English, Spanish and Arabic.

The announcement that Cumhuriyet would reprint parts of the magazine has caused an uproar among some extra-sensitive Islamists in Turkey. While over the past week some pro-government media has been declaring even mentioning of the Mohammed cartoons as blasphemy and insult to religion, now thousands of people in Turkey have turned to Cumhuriyet as the local target. The newspaper headquarters have been receiving countless threats over the night, including serious death threats.

Few hour after the threats starting flowing into Cumhuriyet’s inbox, the mayor of Ankara tweeted his message that this is a plot to make muslims appear violent. He accused Cumhuriyet of participating in an international plot to provoke devout muslims to raid the newspaper headquarters and play the victim. He also invited all his twitter followers to take Cumhuriyet to court for blasphemy, which is punishable by prison sentence in Turkey. However the police did not allow the “crime” to be committed and raided the Cumhuriyet Daily’s printing house, to make sure no caricatures of Mohammed are printed. Open censorship had been an issue in Turkey with regards to books, but raid of a newspaper printing house has been absent from the application for some time.

On the other hand the daily’s twitter account announced that the newspaper will reprint parts of Charlie Hebdo’s latest issue in four pages, to show their solidarity and support for free speech and press freedom; and while doing so they have regarded the sensitivity of the religious citizens of the country. While on the other hand it is mostly ignored that the Quran itself does not prohibit representations of the Islamic prophet, but the worshipping of the idols.

However, the digital lynching campaign seems to continue as this piece is being written, and the threats might in fact turn into reality. Currently Cumhuriyet holds an unfortunate world-record in the number of (8) journalists that have fallen victims to assassinations and bombings. Last time the newspaper headquarters was subjected to bombing was in 2006, but no one had gotten hurt. Although, the hate speech and targeting by Islamist media has so far proven to be heavily destructive. The Armenian-Turkish journalist Hrant Dink’s case is still referred to as such an example. The journalist had been targeted by some media which later on sparked nationalist reaction and he got shot on his back in front of his newspaper in 2007, on January 19. Now, the same media’s putting Cumhuriyet and the satirical magazines on the target reminds of that unfortunate past and is perceived as worrisome.

“No need for any worry, we will come out of this just fine”

Cumhuriyet Daily’s cartoon problems have appeared previously as well. One of the cartoonists of the newspaper, Musa Kart drawn -back then- Prime Minister Erdoğan as a cat and got sued for it, which had started a wave of drawing Erdoğan as an animal in the satirical magazines. The famous cartoonist also is on trial expecting 9 years prison sentence in the last few months for his drawings in the newspaper and had given the statement “if I must go to prison for exercising the duties of free press, then so be it. Today caricaturists are sitting on the bench waiting trial in Turkey but this proves that justice only comes as a comic drawing here.”

Moreover, the Cumhuriyet Daily’s editor-in-chief has declared a published a statement regarding today’s Charlie Hebdo issue:

“Cumhuriyet has lost writers to terror attacks in the past, and therefore understands very well the pain of the Charlie Hebdo massacre.

We have condemned this attack on the freedom of expression in the most severe manner. We have displayed our solidarity in our news reports and commentary.

As part of our solidarity with Charlie Hebdo, we feature a 4-page selection from its special edition in our newspaper today.

In preparing this selection, in light of our editorial code, we took the freedom of belief and religious sensitivities of all societies into consideration

Cumhuriyet will continue to defend the freedom of expression with all its strength as it always has.

Following broad debate and consultation, we did not include the cover of the magazine in our selection.” 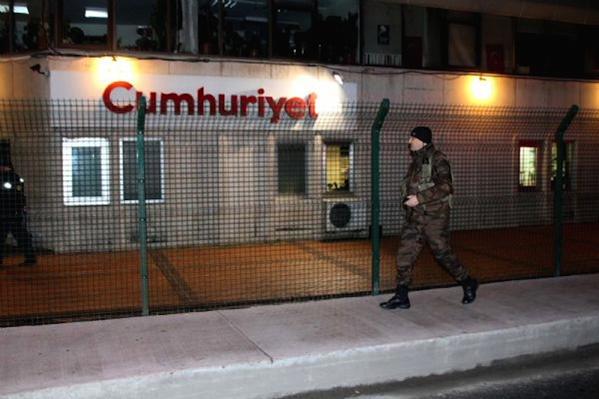 In the recent weeks, there has been an uproar in pro-government media in Turkey with regards to the cartoonists, and several columnists had targeted the comic relief and showed satire as a dangerous weapon.

According to international observers, Turkey has a very low rating for press freedom and is listed as “Not Free” in the Freedom House rankings on journalism. According to PEN Norway’s report on free speech in Turkey, there are still dozens of journalists in prison and dozens more on trial. As the Cumhuriyet’s new issue with Charlie Hebdo content will appear at kiosks on wednesday morning, we will see how the statistics may change now; yet it seems like the need for immediate protection of the newspapers headquarters would be a necessity. After the violent threats, one can not help but wonder if the imams in Turkey would stand in solidarity and show support for free press as did the German-Turk imams in Germany after the attacks in Paris. During the past week millions of people have declared themselves also to be Charlie, but on Wednesday now Je Suis Cumhuriyet. 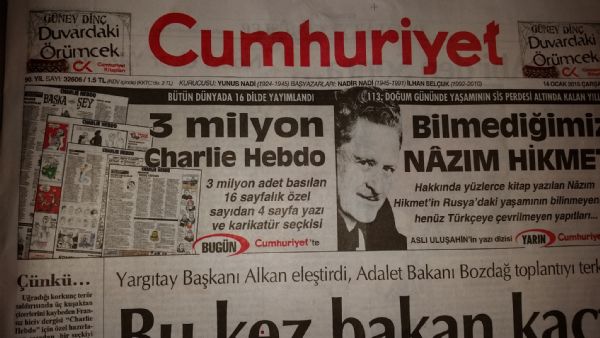