80 people have been arrested simply for speaking up against state terror and capitalism, by a total panicked riot police force in Paris desperate to repress spontaneous demonstrations over the execution of 21 year old Remi Fraisse at Testet.

Cops encircled people, trapped them, captured them and dragged them to police vans simply for being on the streets and speaking up, such police brutality and abuses simply remind of well known totalitarian regimes, deplored by Europe all over the world, except in Europe. 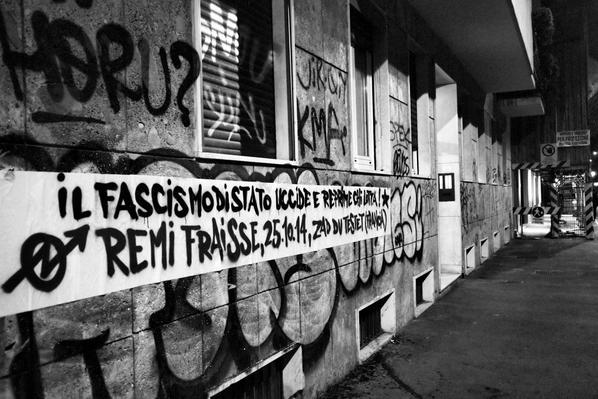 Milan, Italy, “The state fascism kills and persecutes who fights” 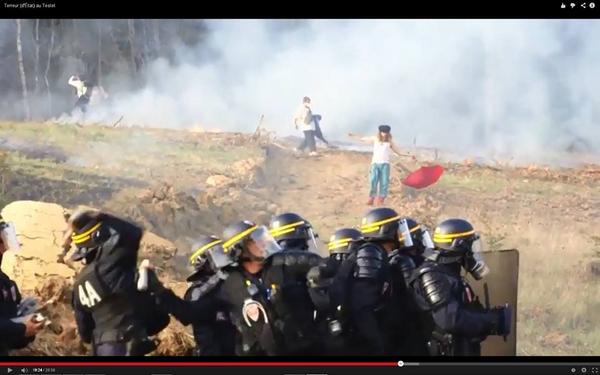 The streets of Paris, Lyon and other cities have been covered in anti-capitalist, anti-police and anti-state messages; the signs of rage over the assassination by the police of a 21 year old pacifist, and defender of the Testet forest.

Remi Fraisse died on the spot when he was hit by a tear gas grenade fired by riot police Saturday night during the repression of a protest in the Testet forest to stop a dam which will profit some industrial farmers at the cost of destroying 40 ha of forest.

“Down with the Capital!” in the center of Paris.

“Not even one more compromise.”

“The capitalists and their police assassinate our comrades. We’ll put an end to this.”

Homage to Remi, a student who protected the environment.

“No to the Sivens dam. Nature is horrified by stupid projects.”

Witnesses’ testimonies forced cops to admit they killed Remi. A state official called him “stupid” for “dying for an idea”. While state officials are trying to control the public rage over the police killing by claiming that patience is needed for “proper investigation”, the boss of riot police said that Remi’s murder was a fatality and that no cop will be suspended. He hinted no cop will be held accountable either. Images filmed just prior to Remi’s assassination expose the barbarism of the police and their brutality in repressing the protests.

Images above have been aired by France 2 aired and they prove the barbarism of the police repression against ZAD. Cops fired with intent to kill, unlike what their boss says, they fired tear gas grenades at people who were several meters from them.

Video of police terror against ZAD at Testet, prior to the assassination of Remi:

Today at Testet, cops were even more violent:

Hundreds gathered in spontaneous demonstrations, called “illegal” by the French media, in Paris, triggering a massive deployment of cops. 200 people were interrogated by police for simply being on the streets. Cops tried to stir violence, they encircled over 100 protestors around the town hall and tried to kettle them. Protests are announced in Italy tomorrow, too.

via Les Enrages: “Prison under the sky: 80 comrades arrested. The power is in total panic. Protest is legitimate response to the violence of State!”

Demonstration in Saint Etienne in the memory of #RemiFraisse

A recruitment center of the riot police was occupied during the day at Rouen.

In #Gaillac clashes broke out during the demonstration in memory of Rémi Fraisse.

The chief of riot police claims that cops have the right to kill because “they did not have the intention” to murder Remi, he says it’s not “conceivable” to suspend cops over the assassination of Remi. This cop positioned himself above any state law, since prosecutors claim that the “investigations” of Remi’s assassination continue. Apparently, anyone’s life is cancelled just at the sight of cops in Europe, since they are not responsible when they fire their lethal projectiles. Remi’s death is also another proof that police riot weaponry cause death, but it seems that since they are called non-“lethal” by the apologists of state barbarism, cops who use them are absolved of any responsibility. Death is what awaits anyone who stands in the way of profits which in Europe are placed above all, life, human needs and environment.