Trending
You are at:Home»Europe»2,899 Libraries Closed Down in Turkey in 2014
By gurkhan on 08/07/2015 Europe, Turkey
1.5k
SHARES
VIEWS
FacebookTwitterGoogle
WhatsappPinterestDiggLinkedinRedditStumbleuponVkDeliciousBufferWeiboPocketXingTumblrMailMeneameManagewp

Turkish Statistics Institute has declared numbers on reading materials and libraries for the year 2014, and the numbers do not look bright. According to the statistics, 2,899 libraries in Turkey have been closed down in the year 2014 and the number of books available in the country has seen a decrease of 10.9% in the same year. This is the first time statistical data has been made public by the institute regarding the number of libraries in the country, and the report encompasses schools, private schools, tutoring houses that are required to have libraries. Currently, there are 27,948 libraries in Turkey for a population of 77 million. Among the nation, only 1,209,948 people have membership for a library.

In Turkey, there is one national library, 1,121 public libraries, 559 university libraries, and 27,948 school & education institute libraries, making up to a total of 29.629. Among these libraries, the National Library has increased the number of books by 12.8% compared to the previous year, and other materials by 4.8%. 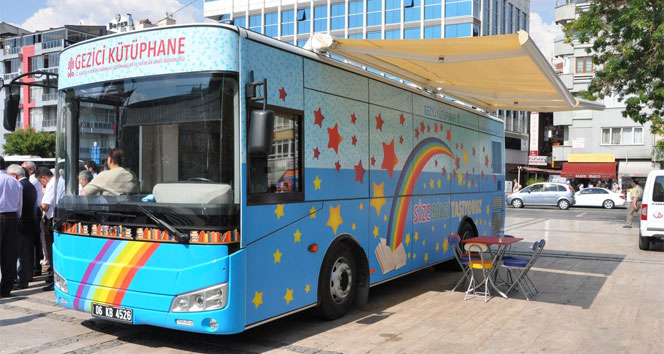 One of the 10 Mobile Libraries traveling across Turkey

Before state’s National Statistical Institute declared the numbers, the national library association used to declare number of libraries and books available; according to those numbers there used to be 1,367 public libraries across the country in 2004, and by the end of 2012 this number had dropped to 1,112. Yet the numbers declared by the state show 1,121 as of 2015 with a supposed increase of 0.3% compared to 2013. In the same manner, the number of library-goers have seem to not changed much compared to 2005 (~20 million then and now), even though there is now about a 10% bigger population.

The government between 2001 and 2011 has followed a policy of handing over management of public libraries to local municipalities without extra funding. The municipalities which already had been suffering major economic problems, could not possibly go through with sustaining the libraries thus left the institutions to their destiny. As a result, over a decade 321 libraries had to close down and the number of library-goers did not increase really. Combined with the thousands of books and websites still banned in Turkey, the approach to libraries and public’s access to information seems controversial.

Another significant number to be reminded of is the result of other statistical data supplied by the same institution; ratio of regular readers in Turkey is only 0.01% compared to EU’s 21%, and an average Turkish person only spares 6 hours per year for reading, and the budget allocated to books per capita is ~2$ a year.